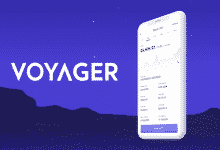 As per an official tweet by the Crypto exchange brokerage Voyager Digital, the company is now listed on Canada’s TSX Venture Exchange which will enable them to bring in more transparency to their business and showcase the same in a growing and thriving sector. The Shares would be traded under ticker sign VYGR.V.

The tweet read “Voyager is now trading on the TSX Venture Exchange. For us, going public just made sense to bring transparency to our business and promote it across this emerging and thriving sector. Learn more about why we chose to go public and join us in our journey.”

E*Trade veteran Steve Ehrlich and Oscar Salazar who is the former CTO at Uber and one of the company’s original employees are the co-founders of the company.

The listing was announced post completion of the so-called reverse takeover which is also termed as a reverse initial public offering or backdoor listing.

Talking on the step taken up by the company, Voyager’s CEO, Stephen Ehrlich, stated that ”This is a crucial step for our growing company as we now have a solid capital base with which to grow, expand and continually improve our offering for investors. More importantly, it allows the investing community to tap the public markets for exposure to this important asset class and financial utility that is built upon the technology of the future.”

During the previous week, Voyager had declared that the company’s union with UC Resources, a former shell company, was at the final stages of completion. Such a move enables the crypto brokerage to qualify as a TSX Venture Tier 2 Company.

Usually, a reverse takeover takes place when a privately held company collaborates with a publicly traded company, in the process letting the companies avoid few of the bureaucratic inspections, regulatory issues and due diligence that is involved in the process of going public. Once the process is completed the buyer automatically gets an entry on the relevant stock exchange.

Since Voyager has chosen to go public, hence it would need to disclose its quarterly and annual reports. Further, the company would also be required to report any kind of mergers, acquisitions, insider trading, and security transactions by the company’s employees and also report on any changes in the ownership.

Further, the firm is also working on another application that would enable them to introduce a zero-fee mobile crypto trading app in the near future. The app would allow investors to trade and monitor their digital assets across multiple crypto exchanges. Presently the application is in its test stage.

In Last October, the company had revealed that it had introduced their institutional trading service, and soon plans to launch their retail trading services for the United States residents, later followed by the launch in Canada by Q3 of 2019.