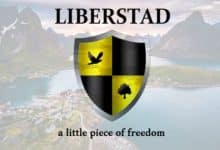 As per a press release announced in the last week, Norway based, private anarcho-capitalist city, Liberstad, has further improved on its blockchain development and adopted a native cryptocurrency to its blockchain powered smart city platform as its official medium of exchange.

Liberstad was founded in 2015 and is operated by the non-profit Liberstad Drift Association with a motive to form an independent city-society which would be free from the regulations of government laws and forego taxes in favor of the private sector funded service. Liberstad was the outcome of the Libertania project

According to the reports, the city’s freehold lands were first sold for either Bitcoin (BTC) or Norwegian krone starting 2017 which are said to be bought by over 100 prospective residents up to April 2018.

The head of Liberstad Drift AS, John Toralf Holmesland, has assigned the project’s encouragement to libertarian ideology and non-aggression principles by stating that, “We are a small group of individuals who are seeking a change in the way society works. We want a society where people decide over themselves and can live together without government authorities. We want a society without government coercion, blackmail, surveillance or unnecessary violence. This is why we want to establish a private city where individual freedom and voluntary co-operation lays the foundation for development of the city. Completely free from government authorities who puts obstacles for both urban and industrial development.“

He further added that “Liberstad will become a city where anarchism can get a physical foothold in one of the worlds most socialist countries. We want a society where people decide over themselves and can live together without government authorities. We want a society without government coercion, blackmail, surveillance or unnecessary violence. Liberstad will become a city where life is easier, more relaxing and without a high cost of living. In the long term, we can together develop a private city where people have greater freedom and opportunity to live the life they desire.”

Currently, the city which is in its growth stage has adopted the cryptocurrency “City Coin” (CITY) that would be used as the means of exchange in Liberstad’s closed market. The national fiat currencies banned in the city.

CITY is interoperable with Liberstad’s blockchain-powered smart city platform, “City Chain,” that permits the citizens and entrepreneurs to create and render services “on a private, internal and voluntary basis” to substitute the public provisions which are operated by the government departments.

Further, the press release stated that the disintermediated and unfaithful architecture of blockchain is the “key ingredient for the development and prosperity of sustainable and free city-societies.”

The future residents would touch-base with the City Chain platform via municipal app “City Hub” which is a dashboard that would enable the community to execute a series of civic functions such as identity management, creating and voting on city-wide initiatives, registering property, contract insurance, and many others functions.

The City Coin deploys a proof-of-stake (PoS) agreement algorithm in which block validators are selected on the basis of the number of tokens staked in their wallet by a given node, in the process awarding tokens to the stakeholders in return for maintaining the network’s safety.

Liberstad is listed among one of those potential smart cities that is accepting blockchain globally. On the other hand, the United Arab Emirates is vigorously seeking the changeover of Dubai to become the first blockchain-based smart megapolis by 2020.

In China, a unit of e-commerce leader JD.com has recently announced a Smart City Research Institute to increase the pace of the development of smart cities with the use artificial intelligence, big data, and blockchain technologies.