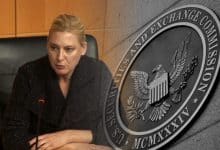 Valerie Szczepanik, the SEC’s Senior Advisor for Digital Assets, stated at Austin’s SXSW conference that some stablecoin projects might soon find themselves in the SEC’s crosshairs and said that few types of stablecoins “could raise issues under securities laws.”

He categorized stablecoins into three parts – stablecoins “tied to some real asset, like real estate or gold and oil,” coins tied to a fiat currency held in reserve, and a third category that may generate issues as per existing law.

She further stated that, “I’ve seen stablecoins that purport to control price through some kind of pricing mechanism, whether it’s tied to the issuance, creation or redemption of another type of digital asset tied to it, or whether it is controlled through supply and demand in some way to keep the price within a certain band.”

She further added that it’s these kinds of projects “where there is one central party controlling the price fluctuation over time, might be getting into the land of securities.”

Although she added that the Commission needs to “look at the facts and circumstances” of each individual project, she was of the opinion that it all ultimately comes down to the prospects that the issuers of stablecoin inform to their buyers. She said that “You’re talking about folks who are buying into that ecosystem, or are buying this coin, with the expectation that somebody else is going to be holding a profit, or guaranteeing a profit, or holding the price at a certain level. Again, that could raise issues under securities laws.”

The legal status of all the stablecoins has been in a fix for quite some time now, especially the “algorithmic stablecoins” class that is not backed by any sort of collateral.

At the end of the last year, one of the stablecoin project known as ‘Basis’ shut down its business post raising $135 million from investors, as later the SEC announced that the stated stablecoin would not be able to avoid itself from being considered as security.

As per Szczepanik, SEC is unconcerned and is not considering the label a blockchain business fixes on their token, whether a stablecoin or otherwise. It deals with all the businesses with the same level of scrutiny. She stated that “Folks like to put labels on things, but we’ll always look behind the label to see exactly what’s happening. So you can call it a utility coin, call it a stablecoin, call it a consumptive coin or some other coin. We’re going to look at the characteristics. What’s the economic reality? What’s happening with the transactions involving the coin? And we’ll give it the label that it deserves under the law.”

She also suggested all the crypto related startups to ask for permission to run an effective cryptocurrency business rather than asking for forgiveness and added that “Not to sound cliche, but we’d much rather people come to us and ask for [permission]—or come talk to us before they do something, rather than doing something and then coming in and asking for forgiveness.”